Scholar Vincent Brown traces a lifelong interest in warfare to growing up in a family steeped in military service and to his childhood in San Diego, “one of the largest military garrisons in the history of the world, and one of the most potent,” as he told Harvard Magazine.

He is the son of Professor Willie Brown, a biology professor and author at the University of California, San Diego, and Manuelita Brown, a mathematics teacher who now works as a sculptor.

“I was born in 1967, at the height of the Vietnam War, and I think that I look back on those 50 or so years and it looks like permanent, endless warfare,” Brown told Harvard Magazine. “And I grew up in a military town that was part of that, that was fundamental to the expansion of U.S. militarism across the world. How could my work not think about those themes?”

Such themes find voice in Tacky’s Revolt: The Story of an Atlantic Slave War, the most recent book from the Charles Warren Professor of American History and Professor of African and African American Studies at Harvard University. Brown’s book is a groundbreaking investigation into the roots, combatants, cartography and reverberations of the largest slave revolt in the 18th Century British Atlantic World.

“This is truly a remarkable and important event in the history of the world, largely unknown (I confess that I was ignorant of it),” writes Anisfield-Wolf Book Awards juror Steven Pinker. “Not only did Brown do heroic work in his original scholarship, but he escaped the insular world of academese and presented it in an accessible and appealing form. It’s a major accomplishment.”

Brown casts Tacky’s Revolt, a multi-pronged wave of uprising in Jamaica in 1760-1761, in its varied particulars, ranging from the forests of what is now Ghana to the mountains of Jamaica to the shipping routes along the Atlantic. He also tells the tale in view of the observation of Olaudah Equiano, a British abolitionist who bought his own freedom in 1766: when you enslave people “you compel them to live with you in a state of war.”

The author joins Equiano in seeing slavery as a sustained collective assault, a form of terror, as well as an institution created through a vast multi-continent network of war and conquest. West Africans brought with them to the Americas a style of fighting that featured scattered militias opposing great powers, with fighters hard to distinguish from noncombatants. This military signature is one that readers might recognize in contemporary warfare.

Brown’s work focuses on the many manifestations of war, the way it shapes horrors like slavery and racism. In teaching, Brown asks the central question of what it means for the United States to be engaged in endless war. He spent roughly a dozen years researching and writing his latest book.

Tacky’s Revolt exists, in part, because the roles for Black actors on screen and stage were limited in 1990 Los Angeles when Brown graduated from the University of California, San Diego with a minor in theater.

“To the extent that there were Black roles on screen, they were mostly what is called ‘urban’ roles, which was kind of a euphemism for ‘street,’” Brown told the Harvard Magazine. “And that just wasn’t me.” Pivoting to his major of history, he said, opened up “more control over my own representation.”

Visual representation is a through-line in Brown’s career. He chose Duke University to pursue his history doctorate partly because it made room to study film theory and film making. This led to Brown creating a one-hour, award-winning documentary on Melville Herskovits, a Northwestern University anthropologist, which explores the politics of knowledge. During the 1920s, Herskovits shot remarkable footage in Africa and became a sort of “Elvis,” Brown said, in popularizing African and African American Studies.

The resulting film, “Herskovits at the Heart of Blackness,” aired on PBS in 2010.

Brown’s years of research at Duke also yielded The Reaper’s Garden: Death and Power in the World of Atlantic Slavery. It explores the culture and ritual of funerals, a kind of “mortuary politics,” in colonial Jamaica and elsewhere. It, too, attracted critical acclaim.

In 2011, Brown received both a Guggenheim and a Mellon Foundation New Directions fellowship, designed for humanists to continue their training. Brown chose to study cartography and the practice of counter-mapping, which uses maps to disrupt entrenched ideas about history, politics and space. The map that accompanies Tacky’s Revolt has been viewed by users in 184 countries.

“Viewed on the map,” Brown writes, “the insurrection appears to have been the product of genuine strategic intelligence, one that utilized Jamaica’s distinctive geography and aimed toward the creation of alternative societies.”

For his part, Anisfield-Wolf jury chair Henry Louis Gates Jr. writes, “While tracing the relationships between African warfare and the uprisings in the Americas, Brown offers beautifully written portraits of those who survived the crushing forces of colonial imperialism and fought for freedom. Above all, this astute and comprehensive book is about agency.”

Brown blends his interest in history and visual arts as the founding director of Harvard’s History Design Studio, set up for researchers who want to explore new modes of researching and narrating history.

He lives with Professor Ajantha Subramanian, chair of the Harvard Department of Anthropology, and their two children in Cambridge, Mass. 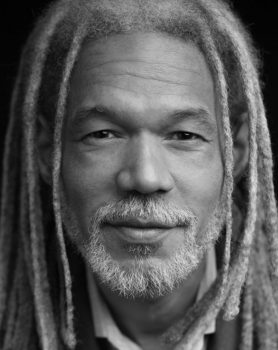