The overwhelming response to The Language of the Goddess from artists, women, mythologists and many others was, for Marija Gimbutas, a complete surprise. When The Civilization of the Goddess appeared two years later, over nine hundred people crowded into a Santa Monica church to celebrate its publication. It is certain that Gimbutas’s vision of Old Europe as a true civilization that was peaceful, egalitarian and expressive of an earth-based spirituality has struck a deep chord. At this critical time when the earth is facing environmental catastrophe and it is clear that we need a change of values, this work questions the precept that Western civilization has always been equated with male domination and warfare. The message is that for thousands of years European people lived quite well as an integral part of the web of nature.

In The Civilization of the Goddess, Marija Gimbutas was the first scholar to describe an overview of Neolithic cultures on a pan-European scale (including habitation patterns, social structure, art, religion and literacy) and to articulate the differences between the matristic Old European and the patriarchal Indo-European Bronze Age systems. This book provides an essential key for deciphering the contrasting cultural elements that became entangled and fused in subsequent European societies.

Marija Gimbutas was a Lithuanian-American archeologist known for her research into the Neolithic and Bronze Age cultures of “Old Europe”, a term she introduced. Her works published between 1946 and 1971 introduced new views by combining traditional spadework with linguistics and mythological interpretation. Her conclusions that Neolithic sites in Lithuania and across Europe pointed to long-term stable egalitarian societies with women at the center materially and spiritually earned a mixed reception by other scholars, but became a keystone of the matriarchal studies movement and the Goddess movement. After arriving in the United States, Gimbutas immediately went to work at Harvard University translating Eastern European archaeological texts. She then became a lecturer in the Department of Anthropology. In 1955 she was made a Fellow of Harvard’s Peabody Museum.

In 1963 Gimbutas was invited to teach at the University of California, Los Angeles where she remained as a full professor until her retirement in 1989. During those very active years, she was appointed Chair of European Archaeology where she stimulated the development of Indo-European studies, became Curator of Old World Archaeology at the Cultural History Museum, edited a number of scholarly publications, and maintained an enormous output of published work while traveling and lecturing extensively throughout the world. She consistently contributed to Lithuanian journals and encyclopedia and was an important figure in Baltic studies. Most importantly, Marija Gimbutas became project director of five major excavations of Neolithic sites in southeast Europe between 1967 and 1980. 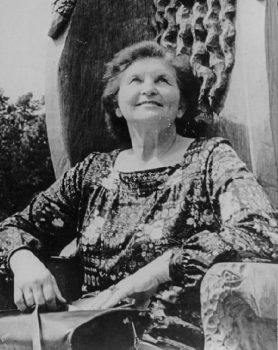