Karan Mahajan was born in Stamford, Connecticut and grew up in New Delhi. When he was 12, Kashmiri separatists set off a car bomb in a market a few miles from his home. At 17, Mahajan enrolled at Stanford University, where he studied English and economics. A week before he arrived, the September 11 hijackers brought down the World Trade Towers and took close to 3,000 lives.

The second event triggered Mahajan’s memories of the first, a largely forgotten attack at the Lajpat Nagar market, where Mahajan’s grandmother had been shopping for yarn the day before the blast killed 13 and injured 30. From these concussive beginnings, Mahajan traveled, researched and put years of writing into building his second novel, The Association of Small Bombs.

It centers on a 1996 car bomb blast in the Lajpat Nagar market and its aftermath. The detonation, chapter zero, catches three young, cricket-playing boys who are out fetching a television from a repair shop. Hindu brothers Kushar and Nakul Khurana die instantly, but their Muslim friend Mansoor Ahmed, 12, survives. The book follows the parental grief of the Khuranas and the coming of age of Mansoor, whose injuries gradually ruin him. All along, the fates of the Kashmiri terrorists radiate from the same bomb, whose consequences attract a charismatic young Delhi activist. He finds Mansoor.

“This is what it felt like to be a bomb,” Mahajan writes. “You were coiled up, majestic with blackness, unaware that the universe outside you existed, and then a wire snapped and ripped open your eyelids all the way around and you had a vision of the world in 360 degrees, and everything in your purview was doomed by seeing.”

In voluptuous, class-astute writing, the novel attracted much praise. Pulitzer Prize-winning author Adam Johnson wrote that it has “the sweep, wisdom and sensibility of the [Russian] masters. Here is the humor of Bulgakov and the heart of Pasternak.” Anisfield-Wolf winner Kevin Powers called it “an utterly brilliant book.”

The New York Times called The Association of Small Bombs one of ten best titles of 2016, and Flavorwire named it a sign of hope for the culture.

Mahajan’s first novel, Family Planning, a comic debut about a New Delhi urban planner with 13 children, was translated into nine languages. Its author, who has read all of Kurt Cobain’s journals, is a critic, essayist and editor. He earned degrees from Stanford and the Michener Center for Writers. He lives and teaches in Austin, Texas. 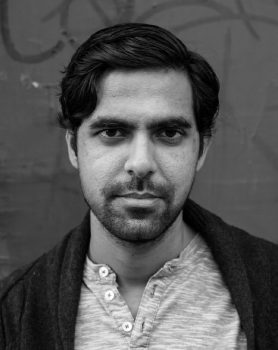