Eric Foner—public intellectual, historian and educator —is among the most influential American historians of the last half-century. He has shaped how scholars and the public understand the politics and ideas that animated the Civil War and Reconstruction and that have carried through to the present. Throughout his life, he has paid close scholarly attention to African American voices and questions of race. In “Who Owns History?,” he wrote succinctly: “A new future requires a new past.”

“Eric Foner is the dean of Reconstruction historians, and is one of the most generous, and genuinely passionate, professors of his generation,” said Henry Louis Gates Jr., chair of the Anisfield-Wolf Book Awards jury. “As a scholar and writer, his footprint is vast, and no one, since the great W.E.B. Du Bois, has done more to reframe the narrative of his field away from the ‘Lost Cause’ myth of white supremacy, toward interracial democracy, truth, and justice. My admiration for him is profound, and if ever there was an exemplar to whom I would point aspiring historians for inspiration in the pursuit of their noble calling, it is Professor Foner.”

Eric Foner, born in New York City, grew up alongside a brother playing stickball and riding bikes in the oceanside community of Long Beach, New York, on Long Island. His parents, Liza Kraitz Foner, a painter and high school art teacher, and Jack D. Foner, a historian and freelance lecturer, convened a lively dinner table. Foner described his father as his “first great teacher.” His uncle, Philip S. Foner, was also a historian and two other uncles, Henry and Moe Foner, were prominent labor leaders.

Foner entered Columbia as a 16-year-old physics major. A few months later, in February 1960, four black college students sparked a protest after being refused service at a Woolworths lunch counter in Greensboro, North Carolina. “Friends and I formed a little group on campus called ACTION,” Foner told a writer for Columbia College Today. “It was ultra-moderate compared to what came later in the ‘60s. But we picketed Woolworths in New York to support the sit-ins in the South.”

In his junior year, Foner found a course on the Civil War and Reconstruction with the legendary teacher James P. Shenton so compelling that he switched majors. That class “probably determined that most of my career has been focused on that period,” Foner has said. He crossed the Atlantic to study at the University of Oxford as a Kellett Fellow, returning to Columbia to earn his doctorate in 1969 under Richard Hofstadter.

In arguably his most influential book, “Reconstruction: America’s Unfinished Revolution,” Foner tracked the warp and weave in the struggle for freedom and equality long after the Confederacy expired. It won the Bancroft Prize, the Francis Parkman Prize, a Los Angeles Times Book Award, the Avery O. Craven Prize and the Lionel Trilling Award. The book is still considered the premier synthesis of the years 1863-1877.

“Like his mentor, Richard Hofstadter, he has had an enormous influence on how other historians, as well as a good cut of the general reading public, have come to think about American history,” wrote Professor Steven Hahn of the University of Pennsylvania.

Foner has worked tirelessly to showcase history outside the classroom, appearing on cable television shows, curating museum exhibits, consulting for Disneyland and helping the U.S. National Parks establish a site devoted to Reconstruction in Beaufort, S.C. He also served as an expert witness for the University of Michigan’s defense of affirmative action in its undergraduate and law school admissions, a case that went before the U.S. Supreme Court in 2003.

Former student Eric Holder, who became the Attorney General under President Barack Obama, said Foner’s classes were the most influential of his undergraduate years. Foner received the Great Teacher Award from the Society of Columbia Graduates and Scholar of the Year designation from the New York Council for the Humanities.

“At a time when the data-driven social history of families and communities was all the rage among other young scholars, Foner persuasively insisted that big ideas and national politics still mattered,” wrote Georgetown University Professor Michael Kazin in December 2019. He praised both the scholarship and moral force of Foner’s command of history.

When Foner’s assessment of “Abraham Lincoln and American Slavery” arrived in 2010, “The Fiery Trial” won the Bancroft Prize, the Pulitzer Prize for History and the Lincoln Prize. The title is Lincoln’s phrase.

“It is probably as close a study of Lincoln’s mind on this critical matter as can ever be written,” Kazin wrote. “Foner’s judgment balances a biographer’s praise with the contextual sobriety of a historian: ‘If Lincoln achieved greatness, he grew into it.’” Foner has been critical of previous historians for glossing over some of Lincoln’s more problematic ideas, such as his support for encouraging black Americans to leave the United States for a colony overseas

Foner is married to Lynn Garafola, a celebrated dance historian and professor emerita at Barnard College. They live on the Upper West Side of New York City and in Connecticut. Their daughter, Daria Rose Foner, will receive her Ph.D. in Art History from Columbia University in May.

“Many people don’t really know much about that period after the Civil War,” Foner told an audience assembled by the Library of America. “Yet it is still part of our lives today. Many of the issues on the front pages of our newspaper are Reconstruction issues: Who should be a citizen? Who should have the right to vote? This was controversial during Reconstruction and is controversial today.” 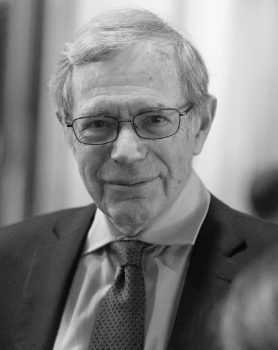