John Lewis was one of ten children born to sharecroppers in Pike County, Alabama. He graduated from high school and entered the American Baptist Theological Seminary in Nashville, Tennessee, in 1957. After graduating in 1961, he enrolled at Fisk University, where he earned a B.A. degree in 1967.

While a seminary student, Lewis participated in nonviolence workshops taught by civil rights activist James Lawson. Lawson was a member of the Fellowship of Reconciliation (FOR), an organization committed to pacifism, and he made Lewis a field secretary. Working with Septima Clark, director of an interracial adult-education center called the Highlander Folk School, Lewis became a leader in the Nashville student movement. He participated in sit-ins at segregated lunch counters, became a founding member of the Student Nonviolent Coordinating Committee (SNCC) in 1960, and helped organize the Mississippi Freedom Summer in 1964.

During his tenure as national chairman of SNCC, Lewis delivered a powerful speech at the 1963 March on Washington, criticizing the federal government for its failure to protect the rights of African Americans. Two years later, Lewis marched with civil rights leader Martin Luther King Jr. from Selma to Montgomery, Alabama, in an effort to secure voting rights for African Americans. During the march, a confrontation with police occurred, and Lewis was one of many marchers beaten in what became known as Bloody Sunday.

Lewis’s commitment to nonviolence strained his relationship with SNCC when the organization grew more militant under the leadership of Stokely Carmichael. Lewis resigned from SNCC in 1966 to become director of the Voter Education Project (VEP) based in Atlanta, Georgia. Under Lewis’s leadership, the organization led voter registration drives and helped elect black politicians throughout the South. In 1976 President Jimmy Carter appointed Lewis to the staff of ACTION, a government agency responsible for coordinating volunteer activities.

After Carter lost his reelection campaign in 1980, Lewis returned to Atlanta and won a seat on the Atlanta City Council. He served until 1986, when he defeated his friend and fellow civil rights activist Julian Bond in the Democratic Party primary for Georgia’s Fifth Congressional District seat. Later that year, Lewis defeated his Republican Party opponent to win the position. In Congress, Lewis has served on the Committee on Interior and Insular Affairs, the Committee on Public Works and Transportation, and the House Ways and Means Committee. 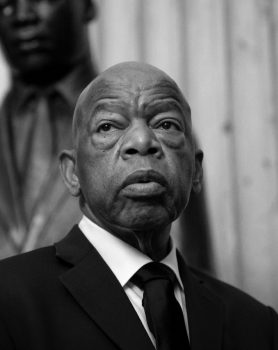