Charles Spurgeon Johnson was a sociologist and activist who, along with W.E.B. Du Bois and E. Franklin Frazier (the first recipient of the John Anisfield Prize), is considered one of the founders of the study of race relations in the United States.

Johnson was born in Bristol, Virginia, and attended primary school in the segregated school system. His family sent him to Richmond to attend a private Baptist school with connections to the prestigious black Virginia Union University, where Johnson earned his undergraduate degree in 1916. Johnson’s exposure to the inequality and poverty faced by southern blacks inspired him to pursue sociology in order to study race relations, particularly in the north during the height of the Great Migration.

Johnson earned his PhD in sociology in 1918 at the University of Chicago under the guidance of Robert E. Park, one of the founders of the “Chicago School.”[1] Park was also the president of the Chicago Urban League and helped Johnson obtain his first professional job as research director for the League. Johnson served a year in France during WWI as a sergeant-major, only to return to racial violence and riots in 1919. He was appointed associate director of the National Urban League and used the research he conducted in that role to write his influential 1922 book The Negro in Chicago.

Johnson left for New York in 1921 to join the National Urban League as its research director. From 1921 to 1928, he oversaw many important research projects, plus in 1923 he founded and edited the League’s journal Opportunity to support black artists. Many of the luminaries of the Harlem Renaissance, including later Anisfield-Wolf winners Langston Hughes and Zora Neale Hurston, benefitted from his support. Johnson’s passion for research led him to join Fisk University in 1928 as a professor of sociology and director of the social sciences department. Johnson wrote his award-winning book The Negro College Graduate during this time. Along with Ralph Bunche and other important scholars, Johnson worked with Gunnar Myrdal on his epic study of race in America from 1938-1940. He remained at Fisk for the rest of his career, establishing financial support for black social science research and communities,[2] and later serving as the institution’s first African-American president from 1946-1956.

In addition to his academic career, Johnson worked as a board member on many national commissions, including for racial violence and public housing. He wrote a critical study of forced labor in Liberia for the League of Nations in 1930 called Bitter Canaan. In 1946, President Truman appointed him to the UNESCO delegation to Paris, and Johnson was also part of the commission that reorganized education in Japan after WWII.[3] Johnson died at the age of 63 in 1956 while on his way to a Fisk Board of Trustees meeting.[4]

[2] Ibid. Among the organizations who donated funds were the Julius Rosenwald Fund and the American Missionary Association. 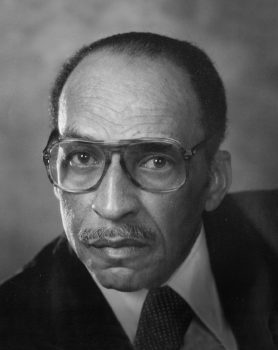