Ralph Johnson Bunche (1904-1971) was among the most prominent sociologists, diplomats, civil rights and peace activists of the 20th century. He was born in Detroit, Michigan, but moved to California at the age of 13 after his parents died, where he was raised by his grandmother, Lucy Johnson. Bunche graduated summa cum laude from the University of California, Los Angeles in 1927 and went on to earn his MA and PhD in political science from Harvard University. When he graduated in 1934, Bunche won the prize for outstanding doctoral thesis and was the first African-American to graduate from an American university with a PhD in political science

He conducted his postdoctoral work on African colonialism, and held several prestigious postdoctoral posts, including ones at Harvard, the London School of Economics, Northwestern University in Illinois and the University of Cape Town in South Africa. He held the latter post despite the South African government’s objections to hosting a black scholar.[1] Bunche also worked with Gunnar Myrdal on his epic study of race in America from 1938-1940, along with other important scholars, including Charles S Johnson and Ashley Montagu. Johnson and Myrdal were fellow recipients of the John Anisfield Prize, and Montagu later served as jury chair.

In 1936, Bunche received a fellowship from the Social Science Research Council[2] in addition to $500 from the John Anisfield Award,[3] to continue his research into colonial politics in Africa. The full title of the monograph funded by the SSRC was “An Analysis of the Political, Economic and Social Status of the Non-European Peoples of South Africa”, shortened to “Non-European Peoples of South Africa.”[4] Although Bunche did propose a book of this title, he ultimately did not write it.[5]

Bunche joined the faculty of Howard University in 1928, where he founded and chaired the Department of Political Science. His experience as a scholar of international politics led him to join the war effort during World War II, eventually leaving Howard to join the Office of Strategic Services (OSS) in 1941 as a specialist in African Politics. In 1944, Bunche moved to the State Department where he was the first African-American to run a departmental division in the federal government. That same year, he began work with the United Nations. Bunche participated in the Dumbarton Oaks conference that drafted the UN Charter, and helped lead UN efforts to oversee the process of decolonization. To that end, he held the position of principal director of the Department of Trusteeship and Information from Non–Self-Governing Territories from 1947-1954.[6]

Bunche went to Jerusalem in 1948 to assist in the peace process and stepped in to negotiate the treaty to end the Arab-Israeli war when the UN appointed negotiator, Count Folke Bernadotte, was assassinated that same year. He single-handedly negotiated the treaty, which earned him the Nobel Prize for peace in 1950. Bunche was the first African-American to win the Nobel Prize.[7]

The American Political Science Association elected Bunch president in 1953 in recognition for his scholarly contributions to the field. In another milestone, he was its first African American president. Unofficially, Bunche also advised several civil rights organizations, and walked the Selma-to-Montgomery March with Dr. Martin Luther King, Jr. in 1965. For his work as a diplomat, scholar and peace activist, President Kennedy awarded Bunche with the National Medal of Freedom in 1963. Bunche retired from the UN in 1969 and died a year later in New York City at the age of 66.[8]

[3] The first recipient of the John Anisfield Award, E. Franklin Frazier for Negro Family in Chicago (1934) was also an SSRC sponsored study.

[5] See Trustee for the Human Community, edited by Hill and Keller. 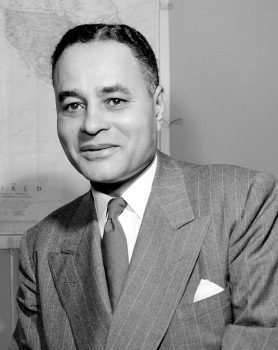