Best known for his novels and essays steeped in his love of the American West, Wallace Stegner received the Anisfield-Wolf Award in 1946 for One Nation, for which he wrote an essay to accompany a collection of photographs from Look magazine. A decade before the wider white society had begun to think seriously about race relations, Stegner’s work targeted racial prejudice as one of the country’s most profound ills.

Born Wallace Earle Stegner on February 18, 1909, in Lake Mills, Iowa, his childhood was spent in various western locales as his farming family moved often in search of work. Stegner attended the University of Utah before returning to Iowa for graduate studies. He taught English at Utah while launching his writing career – the early success of his first book, Remembering Laughter, sent him on his way in 1937. In 1945 Stegner went to Stanford University, where he founded a thriving creative writing program, nurturing such writers as Raymond Carver, Robert Stone, and Larry McMurtry. He retired from teaching in 1970 to devote more time to his own writing.

Among Stegner’s most notable works are Big Rock Candy Mountain (1943), an autobiographical novel about an itinerant Western childhood; Angle of Repose (1971), an imagined family history spanning a century; and The Spectator Bird (1977), a dark novel of personal tragedy. Stegner’s books won him a Pulitzer Prize, a National Book Award, and for his career as a whole he was awarded the National Medal of the Arts in 1992. More than many of his contemporaries, Stegner entered public discourse, voicing strong warnings about environmental destruction and the need for conservation of America’s natural resources. He died in 1993, following a car accident. Known widely as a Western writer, Stegner wrestled with the stereotypes of his beloved region, pointing out that despite its history as “politically reactionary and exploitative,” the West is also, at its best, the home of “the heroic virtues: fortitude, resolution, magnanimity.” 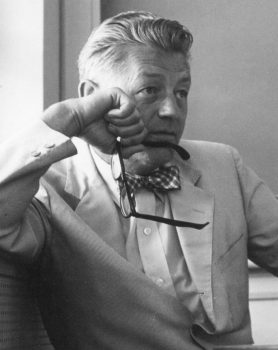 Wallace Stegner with the Editors of Look