Rowan Ricardo Phillips, raised in New York City, found himself writing much of his second poetry collection in the mountains of Aspen, Colorado. He is a translator and critic with an affinity for languages, and has won a Whiting award, a John Simon Guggenheim Foundation grant and a Pen/Joyce Osterweil prize.

Educated at Swarthmore College and Brown University, Phillips is also a lauded sportswriter, covering basketball and soccer for The New Yorker, The Paris Review and The New Republic. He lives in Barcelona and New York.

“I’m a skygazer by compulsion,” he told poet Lawrence Joseph. “I always have been — waiting out at sunsets, rising early for sunrises, the appearance, disappearance, and re-appearance of phenomenon — and I’ve always lived near a river or the sea… I remember as a child saying things to myself such as ‘I’m a fisherman of the sky.’”

So Heaven brims with 38 poems that ask “Who the hell’s Heaven is this?” and then splinters the answers into a night sky’s worth of possibilities. In the conclusion of the poem The Empyrean (Dante’s description for the abode of God), Phillips writes:

…This was not a Heaven
Of my invention. And that’s what scared me:
That I didn’t make it or dream of it;
I didn’t believe in it or buy it.
And yet there it stood: the supreme city;
Feral, spurned, and up on its hind legs
Like a bear before a walker in the woods.

When Heaven published, Phillips created a kind of liner notes by sharing early drafts on social media, using it to circulate poems and photographs that inspired him. Readers could see George Zimmerman in the opening of News From the Muse of Not Guilty: “He sits in a Hawaiian shirt over a bulletproof vest,/Slumped in a beach chair, its back to the ocean./Even his red wine spritzer tastes like Skittles now.”

Phillips’ words insists on the strangeness of difference—the classics haunt his poems, but so do roosters in Ohio, Led Zeppelin riffs in the basement and the Wu-Tang Clan.

Asked about his mix tape of formal poetic strategies, Phillips said, “There’s a line by the Catalan poet J.V. Foix that best sums up my feelings about all of this —M’exalta el nou i m’enamora el vell, or, “I’m exalted by the new and in love with the old.’” 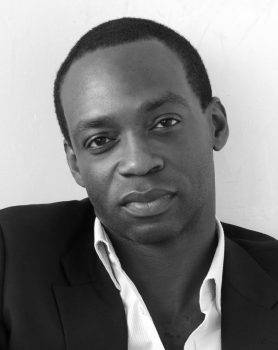