“I do not belong to the sobbing school of Negrohood who hold that nature somehow has given them a lowdown dirty deal and whose feelings are all hurt about it. Even in the helter-skelter skirmish that is my life, I have seen that the world is to the strong regardless of a little pigmentation more or less. No, I do not weep at the world—I am too busy sharpening my oyster knife.”

This quotation from her essay “How It Feels to Be Colored Me” (1928) portrays Hurston’s joyfully contrary view of herself in a world where being black was often perceived as a “problem” and portrayed that way even by black writers. Hurston considered her own blackness a gift and an opportunity. As an anthropologist and writer, she savored the richness of black culture and made a career out of writing about that culture in all its color and fullness. In the process, she became a vibrant figure in the Harlem Renaissance and is now considered one of the defining authors of the African American literary tradition.

Hurston claimed to have been born in Eatonville, Florida, in either 1901 or 1910, but recent scholarship indicates that she was probably born in Notasulga, Alabama, in 1891. She did, however, grow up in Eatonville, the first incorporated black town in the United States. Unlike many Southern towns, where African Americans lived under the constant specter of racial harassment or discrimination from their white neighbors, in Eatonville whites only passed through on the road to Orlando. Growing up in a town where she was surrounded by black culture and self-sufficient black people provided the foundation for Hurston’s work. It was to this organic African American community that she kept returning as an adult—literally, for her anthropological research on African American folklore, and figuratively, in her novels and stories.

In her 1942 autobiography, Dust Tracks on a Road, Hurston recalled that in her family, her mother, who died when Hurston was 13, was the one who encouraged her to “jump at de sun.” After her mother’s death, Hurston left home and school to work as a maid for a traveling theater company. Her further education came slowly and sporadically, and embarrassment over this probably led her to lie about her age. Hurston received a high school degree from Morgan Academy in Baltimore in 1918 and then took courses at Howard University intermittently until 1924. What was most likely her first published story, “John Redding Goes to Sea,” appeared in Stylus, Howard’s literary magazine, in 1921.

In 1925 Hurston moved to New York and soon became part of the convergence of African American writers, artists, and musicians in Harlem known as the Harlem Renaissance. Hurston was an immediate success in Harlem literary circles: scholar Alain Locke chose her short story “Spunk” for inclusion in his landmark 1925 anthology, The New Negro, and two of her pieces received awards from Opportunity magazine in May 1925.

Hurston received a scholarship to study anthropology at Barnard College, under Franz Boas, a Columbia University scholar. The only black student at Barnard, she received a bachelor of arts degree in 1928 for research that focused on black folklore. Hurston continued to write fiction, but in 1929 she also began a series of fieldwork trips to the American South, Haiti, and Jamaica to collect black folklore that formed the basis for much of her later writing. Hurston received Rosenwald and Guggenheim fellowships and private funding from a white patron to support her research. She wrote at least three books that focused exclusively on her findings: Mules and Men (1935), the first collection of black folklore by a black American; Tell My Horse (1938), materials on the folk religion Vodun gathered during travels to the Caribbean; and The Florida Negro (1938), which was funded by the Federal Writers’ Project but never published.

Hurston’s interest in black culture was also reflected in her fiction, which was often set in all-black communities and attempted to capture dialect and local life. She published four novels between 1934 and 1948, including what became her most famous work, Their Eyes Were Watching God (1938). But in the 1930s and 1940s, Hurston’s works were often considered anachronistic or offensive even by black audiences. Author Richard Wright accused Hurston of portraying a “minstrel image” of African Americans—in contrast to more politically oriented books like his own Native Son.

Hurston also came under criticism from the African American community for some of her political beliefs. For example, her own positive experience within all-black communities made her an outspoken critic of integration. Many other African Americans have since come to agree with that view, but during Hurston’s lifetime, black segregationists ran against the grain. And when Hurston portrayed black characters not as victims of society, but as individuals who were as capable of succeeding and living and loving as anyone else, she was accused of being naive and ignoring social realities.

By the 1940s Hurston’s style was considered passé in the current literary scene, and she was no longer able to support herself as a writer. Largely forgotten, Hurston returned to the South, and during the 1950s took a series of menial jobs while trying fruitlessly to find a publisher for several new works that she hoped to produce. On January 28, 1960, she died of a stroke in a Florida welfare home. She was buried in an unmarked grave.

In the 1970s, however, Hurston’s works underwent a dramatic literary renaissance, based largely on the power of Their Eyes Were Watching God. The story follows a black woman, Janie, through several black communities and several love relationships. Over the course of the novel, Janie comes to recognize and embrace her own identity. Long after Their Eyes had gone out of print, black women continued to circulate old paperback and photocopied versions, and in the early 1970s, writer Alice Walker published a widely read essay about Hurston and her work. Their Eyes was reprinted at the height of the women’s movement, and black and white scholars alike embraced it as the first black feminist novel.

Since its rediscovery, Their Eyes has become one of the most frequently assigned novels on college campuses and one of the best-known works of African American literature. Moreover, Hurston’s other books have been reprinted, scholar Robert Hemenway has written her biography, and Walker and other contemporary black women novelists freely acknowledge her influence on their work. A new generation of readers has been exposed to a writer who celebrated black culture and refused to portray blacks as victims, who saw the world as her oyster, and sharpened her knife. 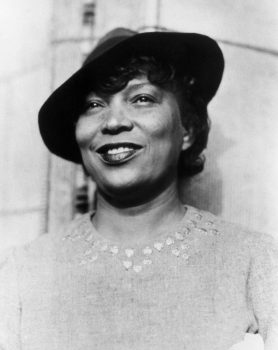