Ten years after Edith Anisfield Wolf established the book prizes, Soviet troops advanced across southeastern Poland and liberated Auschwitz, the complex were 1.3 million were enslaved — and 1.1 million murdered — during the Second World War.

Did the prominent Jewish Clevelander with family in Austria ask herself in 1945, “In the face of such decimation, what good is a book award?”

Seventy-five years after the fact of Auschwitz was laid bare to the world, “attacking Jews has once again become socially acceptable in many countries – across the left-right ideological spectrum, and among groups that blame Jews for their grievances and oppression” writes Dr. Walter Reich, former director of the United States Holocaust Memorial Museum, in the Atlantic Monthly.

He attributes this resurgence to diminishing general knowledge of the Holocaust. “The horrifying knowledge of where anti-Semitism can lead,” he writes, “has been, in large measure, lost in a miasma of forgetting, ignorance, denial, confusion, appropriation, and obfuscation.” 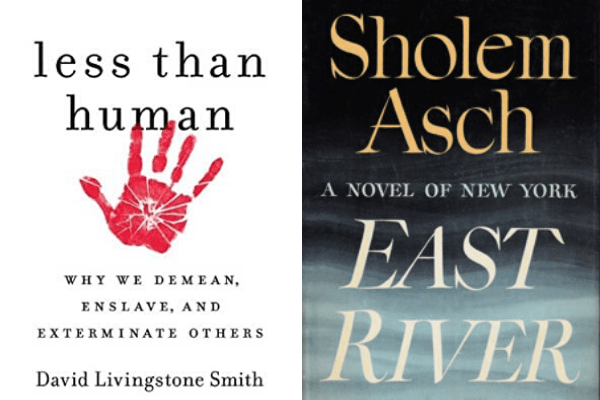 In 2012, Smith won his prize for “Less Than Human: Why We Demean, Enslave, and Exterminate Others” and Asch — a Polish-born immigrant to the United States — for his 1947 novel “East River.”

“Smith has some grim and important stuff to say about the Holocaust, and Sholem Asch is a great pairing,” Nielson writes. “Asch has a devastating short story about identity, dehumanization and survival called ‘Heil, Hitler!’ that is a powerful — if hard for some — choice to read.”

In “Less Than Human,” Smith writes, “For most readers of this book, the word genocide is probably synonymous with Auschwitz. The Holocaust was the paradigmatic twentieth-century genocide, and is also the most thoroughly documented one. These is an immense literature describing how Germans of the Third Reich thought of Jews, as well as Slavs and Gypsies, as less than human, portraying them as apes, pigs, rats, worms, bacilli, and other nonhuman creatures. And it is abundantly clear from this evidence that the Nazis did not intend the term subhuman to be taken metaphorically.”

“’One does not hunt rats with a revolver,’ quipped one SS expert, in a chilling allusion to the mass exterminations, ‘but with poison and gas.’”

Standing between the Nazis and the “degenerate Jew” propaganda was the fiction and plays of Asch. In 1933, Nazi students at more than 30 German universities pillaged libraries in search of titles they considered “un-German.” Among those thrown into the flames were the books of Sholem Asch.