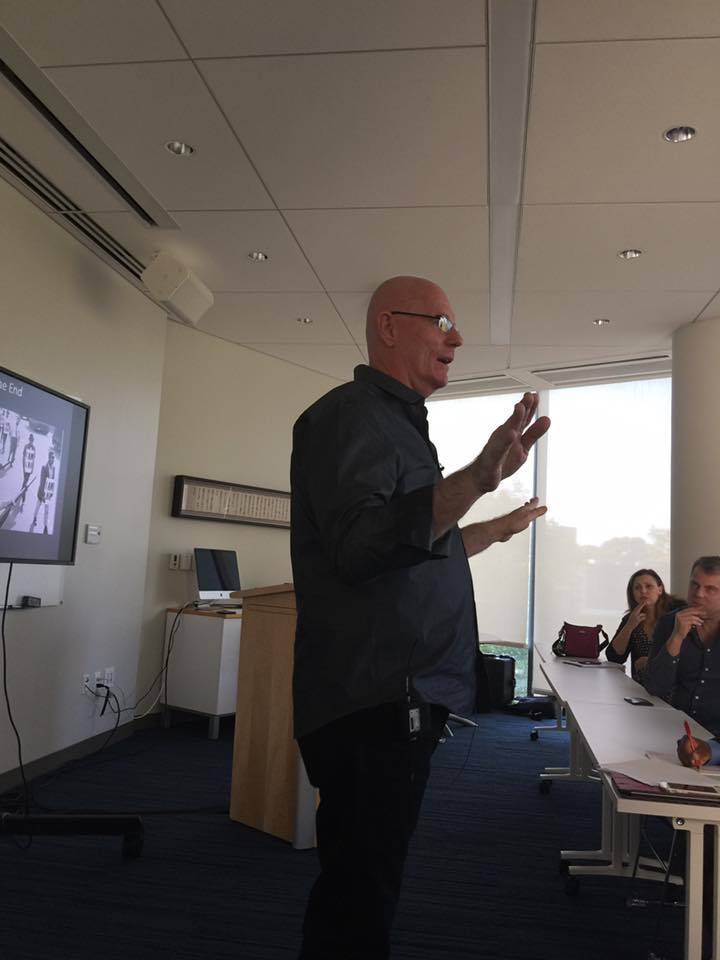 Philosopher David Livingstone Smith gave a lively preview of “Making Monsters: The Uncanny Powers of Dehumanization,” his forthcoming book, for an avid circle of listeners gathered at the Inamori Center for Ethics and Excellence in Cleveland.

The new work examines two cases of spectacle lynching – public events for which railroads put on extra excursion cars, tens of thousands assembled and crowds fought for human relics and nightmarish photos to commemorate the torture and killing of young black men.

Smith, 63, is keen to know “what is going on under the hood here, in these acts pursued by sane, ordinary people…the same sort of folk you’d meet at an average PTA meeting.”

The scholar, a professor at the University of New England, blends an examination of biology, philosophy, language and psychology. He won an Anisfield-Wolf Book Award in 2012 for “Less than Human: Why We Demean, Enslave, and Exterminate Others.” Quite cheerfully, he called attention to critiques of this landmark book, ideas which have helped refine his current thinking.  Smith defines dehumanization as “conceiving of others – whole groups – as subhuman creatures.”

One critique came from philosopher Kwame Anthony Appiah, another Anisfield-Wolf winner, who suggested that the lethal violence perpetrators direct at others is actually an acknowledgement of their target’s very humanity. Such fury is only directed against someone capable of agency — that is moral reasoning.

“Virtually every genocide that I know anything about has been a racialized genocide,” Smith has said. “The notion of race gets us into a lot of trouble.” He told his Cleveland audience that “racializing a group of people is halfway to dehumanization.”

A warm, casually dressed man who is rigorous about definitions, Smith was frequently wry and very comfortable telling questioners when he didn’t know. He participated in a thought-provoking panel on combating dehumanization with Shannon E. French, a military ethics expert who directs the Inamori Center at Case Western Reserve University, and Dalindyebo Shabalala, a specialist in environmental law and the intellectual property rights of indigenous peoples. He is a visiting professor at the Case law school.

“The death penalty in the United States is fundamentally racialized – its roots are in slavery and violent law enforcement,” Shabalala said. “It comes from a story we tell about those getting the death penalty, one that is centered on the black male threat.”

French, whose book “The Code of the Warrior: Exploring Warrior Values Past and Present” was updated and reissued this fall, argued that Tamir Rice would not have died if Cleveland police had adhered to military standards. Fear for one’s own life is no justification for opening fire among soldiers, she said, particularly in an instance when the boy had no gun. “We need a warrior’s code in the police department,” she said.

Shabalala was skeptical that a code of honor could be restored to modern warfare, but French argued that some U.S. generals had insisted on respecting Iraqi culture and people when American forces invaded, and that an alertness to the code among chaplains and others has prevented some atrocities.

When pressed on how to combat dehumanization, Smith called for improved education on our delusions about race. He stressed that we must face “the full extent of our national crimes. I think that would free us in a lot of ways.”