In the summer of 1960, Louis E. Lomax, an American Negro reporter visited several countries in Africa. Lomax skipped the newly independent nations; except for Egypt and Ethiopia, all of his stops in Africa were in territories still ruled by white “Europeans.” As he touched down in Kenya, Tanganyika, Southern Rhodesia and South Africa, Lomax was struck by the growing bitterness many Africans felt toward the United States. And in defending his country, he was also surprised at how often the fact that he was an American seemed much more important than the color of his skin.

Lomax’ most disturbing discovery was that most African nationalists have quite a different objective from American Negro leaders. Instead of integration into a white political and economic system, the Africans are demanding majority rule, which In Africa means black rule. The danger in this, as Lomax points out, is that racism is now beginning to cut two ways. As he puts it: “The attacks upon whites in the Congo were shocking proof that black men are learning to hate. It is more than prejudice. it is a desire to destroy.”

Lomax was born in Valdosta, Georgia and attended Paine College in Augusta, where he became editor of the student newspaper before he graduated in 1942.He pursued graduate studies at American University, where he was awarded an MA in 1944, and Yale University, where he earned a PhD in 1947. Louis E. Lomax began his journalism career at the Afro-American and the Chicago Defender, two newspapers focused on news of interest to African-American readers. In 1958, he became the first Black television journalist when he joined WNTA-TV in New York. In 1959, Lomax told his colleague Mike Wallace about the Nation of Islam. Lomax and Wallace produced a five-part documentary about the organization, The Hate That Hate Produced, which aired during the week of July 13, 1959. The program was the first time most white people heard about the Nation, its leader, Elijah Muhammad and its charismatic spokesman, Malcolm X. 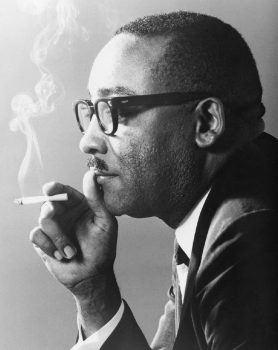