Harold Foote Gosnell was a student and close associate of the politician and political scientist Charles E. Merriam. As a professor in the University of Chicago’s Department of Political Science, Gosnell became an important member of the discipline’s “Chicago school,” which incorporated methods from economics, sociology, and psychology.

Gosnell’s influence in political science began with his dissertation, a study of New York political boss Thomas C. Platt that was among the most successful research produced by Merriam’s students. Early in his career at University of Chicago, Gosnell produced two pioneering books: Non-voting, Causes and Methods of Control (1924, with Merriam) and Getting out the Vote: An Experiment in the Stimulation of Voting (1927), were among the first works in political science to use statistical analysis to draw conclusions about political behavior. Gosnell went on to publish landmark research in Chicago politics and the African-American vote, including Negro Politicians: The Rise of Negro Politics and Chicago (1935) and Machine Politics: The Chicago Model (1937).

In 1941 Gosnell began a career with the federal government, accepting a job with the Bureau of the Budget. In 1946 he moved to the State Department, where he remained until 1960. He continued to publish on voter motivations, though his case studies of presidential leadership demonstrated a shift away from behaviorism. During this period Gosnell also served as faculty at American University, where he conducted research on the Soviet Union for the school’s Special Operations Research Office. In 1962 he was invited to teach at Howard University, where his scholarship on African-American politics was particularly admired.

Gosnell retired in 1970, but continued to receive accolades for his contribution to the discipline, awarded the Charles E. Merriam Award from the American Political Science Association in 1981. Both APSA and the University of Rochester created fellowships named for him, and by the time of his death in 1997 Gosnell was widely considered to have made quantitative analysis mainstream in political science. 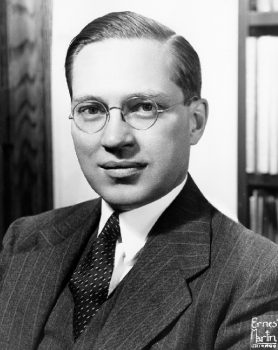