George Lamming is an illustrious Caribbean novelist, poet and cultural critic from Barbados. He was just 23 and living in London when he wrote “In the Castle of My Skin.” It draws on his island childhood of mixed African and English parentage, and reflects on post-colonial and neo-colonial questions of identity. The book was a sensation that won the Somerset Maugham Award and was championed by Jean-Paul Sartre and Richard Wright.

“I am always feeling terrified of being known; not because they really know you, but simply because their claim to knowledge is a concealed attempt to destroy you,” Lamming wrote in this first, autobiographical novel. “That is what knowing means. As soon as they know you they will kill you, and thank God that’s why they can’t kill you. They can never know you. . . The likenesses will meet and make merry, but they won’t know you. They won’t know the you that’s hidden somewhere in the castle of your skin.”

Lamming was born in Carrington Village, Barbados. He earned a scholarship to Combermere, a distinguished high school where his teacher, Frank Collymore, welcomed the young Lamming into his home library on weekends, and encouraged his reading and writing. Collymore published some of his student’s earliest work in the literary journal Bim.

Lamming taught in Trinidad from 1946 to 1950, after which he joined the Caribbean Diaspora in London. He worked first in a factory, then as an announcer for the BBC.  When “In the Castle of My Skin” was published, the reviews were mixed, but a positive piece by V.S. Pritchett proved instrumental to its success. In 1998, Lamming said, “It’s a great pity it didn’t come out third or fourth rather than first. I don’t really regard it as the best or biggest of the books. I think it may be the most organic of books because it came out of the gut, whereas the others were products of the mature imagination, particularly Natives and Season.”

Lamming wrote five more novels and a collection of essays, The Pleasures of Exile, which examines Caribbean politics and race. His poetry and short stories were published in various anthologies. Conversations, a volume of essays and interviews, came out in 1992.

Describing himself as “a political novelist,” Lamming is credited – alongside Wilson Harris, V.S. Naipaul, Derek Walcott, Garfield Sobers and others – with making the emergence of a Caribbean identity possible. Lamming depicts the difficulty of cultural identity in this region as a direct result of colonial rule.

Lamming began his academic career in 1967 as a writer-in-residence and lecturer in the Creative Arts Centre at the University of the West Indies. He has taught as a visiting professor at Brown University, the University of Texas at Austin and the University of Pennsylvania. He has lectured in Denmark, Tanzania and Australia. Lamming has won a Guggenheim Fellowship and the Langston Hughes Award.

The scholar Anthony Bogues notes that “the tight relationship between politics, knowledge, language and the spaces of freedom in Lamming’s writings makes him one of the most important political novelists in Caribbean literature.” 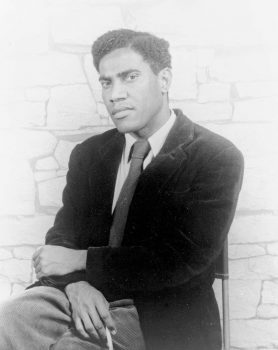