Recipient of the Anisfield-Wolf Award in 1945 for his groundbreaking work, An American Dilemma: The Negro Problem and Modern Democracy, Gunnar Myrdal was a Nobel Prize-winning economist whose influence extended far beyond the confines of his profession. In addition to framing and amplifying the debate over America’s racial hypocrisy, Myrdal investigated poverty in Asia, served on an international war crimes tribunal following Vietnam, and along with his wife, Alva, helped shape the modern Swedish state. Throughout his long career, Myrdal voiced both idealism and pragmatism in urging that human considerations be honored in the study of economics.

Myrdal was born December 6, 1898 in Gustafs, Sweden. An academic star at Stockholm University, he joined the faculty there soon after graduating with degrees in law and economics. The young professor lost no time challenging conventional beliefs in his field, criticizing theories that seemed to him likely to harm the poor. As an author and member of the Swedish government, Myrdal pushed for policies including sex education, child care, and public housing. In 1938 the Carnegie Corporation recruited him to undertake a massive study of the race problem in the United States.

Myrdal would later say the work was flawed, writing that he had underestimated Northern racism and overestimated the potential solidarity between poor blacks and whites. But its impact was enormous; his evidence of the wounds racism caused black children became fodder for the NAACP’s winning brief in Brown v. Board of Education (a footnote in the decision, which outlawed segregation in public education, cites Myrdal’s book). In later years, Myrdal continued to speak against racism and for social change. Testifying before a House subcommittee in 1969, he called for more funding to help bring people out of poverty. “I don’t think America can stand a de facto apartheid too much longer,” he said. “It is against the vision of America.” Myrdal died May 17, 1987, in Sweden. 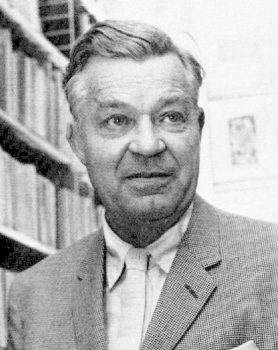