Novelist Walter Mosley, the creator of the private investigator Ezekiel “Easy” Rawlins, has just published a ruminating essay called “Patter and Patois.” He reflects on a lifetime of storytelling, and his Louisiana heritage of stories and storytellers. The 1,800-word piece is homage to his roots.

“I’m not saying that you have to be a reader to save your soul in the modern world,” Mosley writes. “I’m saying it helps.”

Most celebrated for his crime fiction, Mosley, 63, won an Anisfield-Wolf Book Award in 1998 for “Always Outnumbered, Always Outgunned.”  He grew up an only child in South Central Los Angeles, and has lived most of his life in New York City. When Bill Clinton mentioned in 1992 that Mosley was among his favorite writers, the Rawlins series enjoyed a spike in sales.

Readers can take a brown bag lunch to a discussion of “Always Outnumbered, Always Outgunned” downtown at the Cleveland Public Library, Wednesday, August 26 in the literature department.  It is led by Valentino Zullo and is part of the library’s Anisfield-Wolf reading series.

“Some of you may be asking: ‘Hey, John Lewis, why are you trying to write a comic book?’” said the legendary civil rights leader, smiling at the incongruity of this development for an audience at Book Expo America, the annual publishing trade show in Manhattan.

John Lewis was 17 when he met Rosa Parks; 18 when he joined forces with the Rev. Dr. Martin Luther King, Jr.  Five years later, he was one of the “big six,” an architect of the historic Civil Rights March on Washington in August 1963.  Standing at the Lincoln memorial, Lewis spoke sixth and King spoke tenth, stamping the day with his immortal “I Have a Dream.”  Of all those who addressed the throng a half century ago, Lewis is the only one left.

Now, at 73, he has become the first member of the U.S. Congress to craft a comic book.  Called “March,” it will publish August 13, the first in a trilogy written with Lewis staff member Andrew Aydin and drawn by Nate Powell, the award-winning cartoonist.

The idea isn’t as whimsical as it sounds.  Aydin, a comic book enthusiast from Atlanta, knew that in 1957, a 15-cent comic entitled “Martin Luther King and the Montgomery Story” inspired the Greensboro Four.  At least one read the comic and the four students from North Carolina A&T State University decided to sit down in protest at the segregated Woolworth’s lunch counter in Greensboro, N.C.

Lewis himself led a group trying to integrate a Woolworth’s counter Feb. 27, 1960.  They prayed and drew on the principles of non-violence.  “People came up to us and spit on us and put cigarettes out in our hair,” he told listeners at the Book Expo. “I was so afraid, I felt liberated.” The episode led to jail, the first of Lewis’s more than 40 civil rights arrests.

He grew up on 110 acres in rural Alabama, the third child of sharecroppers who managed to buy the land for $300 in 1940.  Young John liked to wear a tie and give sermons to the chickens.  Local kids called him “preacher.” As a boy, he was instructed “not to get in the way” of whites, but he still applied for a library card in tiny Troy, Ala, where the librarian scolded him that they were only for whites.

On July 5, 1998, Lewis returned to Troy, for a book signing of his memoir, “Walking with the Wind,” which won an Anisfield-Wolf Book Award that year.  “At the end of the program, they gave me a library card,” he said. “It says something about how far we’ve come.”

Lewis said he initially resisted Aydin’s notion that he tell his story in a graphic format.  The two were hammering up yard signs in southwest Atlanta during Lewis’ campaign for Georgia’s 5th District seat five years ago and chatting about how to teach the Civil Rights movement to 21st century youth.

“Finally, he turned around with that wonderful half-smile he can do and said, ‘OK, let’s do it,’” said Aydin. “‘Let’s do it, but only if you do it with me.’ ” Aydin called this a threshold event in his life.

“When you grow up without a father you spend a long part of your adolescence looking for one,” said Aydin, who is now 29.  He and artist Powell said “Walking with the Wind” became their Bible as they brought Lewis’ story into the present. The trio frame the trilogy around the 2009 inauguration of Barack Obama.

“We took the accuracy very, very seriously,” Aydin said.  Powell, who grew up in Little Rock, Ark., and now lives in Bloomington, Ind., is drawing the second book now.  He said he emails with Aydin almost daily, and when they are unclear, they consult Lewis.

“I feel the most important thing is to capture what is not explicit in the script,” Powell, 34, said. “I am looking for the emotional resonance – the doubt, fear, unity and togetherness that characterize the Civil Rights movement but don’t come with captions.”

He said he works hard researching the clothes, food, insects and plants that give his art verisimilitude. “It is very easy to get caught up in the drama of events,” Powell said, “but there is a lot of beauty in the South, in the red soil and the bricks, the kind of walking and talking people in the South do.”

Already, Powell has told one Civil Rights story in graphic form, “The Silence of Our Friends,” set in Houston in 1967 and written by Mark Long.  It explores the tested friendship of two men across race.

The Congressman dedicates “March” to “the past and future children of the movement.”  He told the publishing crowd in New York that another installment is overdue.

Anisfield-Wolf winner Walter Mosley gave his readers a true cliff hanger in his last Easy Rawlins book, 2007’s Blonde Faith. The writer left L.A. Detective Rawlins clinging to a cliff. Many assumed the reluctant cop was dead. In the past six years, Mosley has focused on his Leonid McGill detective series, and hinted in interviews that Rawlins’ injuries were indeed fatal.

But Little Green brings Rawlins back from the brink. The new novel is set in the late 1960s, when the detective reunites with old friends and navigates a changing place for black men in American society. (Mosley won his Anisfield-Wolf award in 1998 for “Always Outnumbered, Always Outgunned,” the story of an ex-con in Watts.)

Intrigued? Here are some tidbits to hold you over until you can get your hands on a copy:

Little Green is on sale May 14. Visit WalterMosley.com for dates of the national Little Green book tour.

“Writing is almost a place of dreams for me, and I don’t have to give up anything to do it.” ~Walter Mosley

In this video from BigThink, 1998 winner Walter Mosley shares a bit about his writing career and aspirations (did he always know he would be a bestselling author?) and his daily writing routine.

We thoroughly enjoy when younger audiences immerse themselves in the work of poets who have come before them. A young poet recited Toi Derricotte’s “For Black Women Who Are Afraid,” and praises her work as a co-founder of Cave Canem, the literary home for black poetry.

For Black Women Who Are Afraid

A black woman comes up to me at break in the writing
workshop and reads me her poem, but she says she
can’t read it out loud because
there’s a woman in a car on her way
to work and her hair is blowing in the breeze
and, since her hair is blowing, the woman must be
white, and she shouldn’t write about a white woman
whose hair is blowing, because
maybe the black poets will think she wants to be
that woman and be mad at her and say she hates herself,
and maybe they won’t let her explain
that she grew up in a white neighborhood
and it’s not her fault, it’s just what she sees.
But she has to be so careful. I tell her to write
the poem about being afraid to write,
and we stand for a long time like that,
respecting each other’s silence.

May has been an incredible month for Ms. Morrison. She released her latest novel, Home, to rave reviews and she was awarded the Presidential Medal of Freedom on Tuesday, May 29.

In the clip above, she discusses her novel and her intention to help us remember what the 50s were really like.

We were also treated to this incredible photo of President Obama and Ms. Morrison sharing a private moment after the awards ceremony. Wonder what they were talking about?

During the ceremony, President Obama remarked that this year’s honorees were also his personal heroes, adding a special note about Toni Morrison. “I remember reading Song of Solomon when I was a kid,” he said. “Not just trying to figure out how to write, but also how to be. And how to think.” 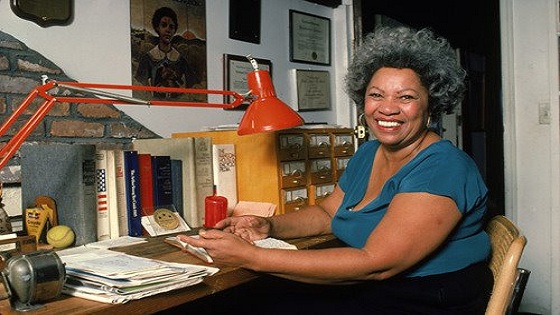 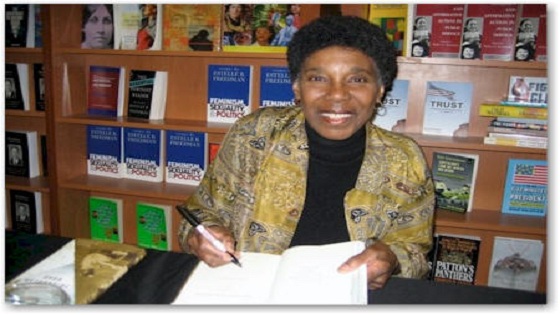 In this series of videos from BigThink.com, 1998 Anisfield-Wolf Award winner Walter Mosley gives answers to all types of questions: What big ideas have you had lately? What’s the biggest misconception about a writer’s life? And perhaps a question every writer and aspiring writer wants to know: What is your writing routine? Get the answers to all these and more below: