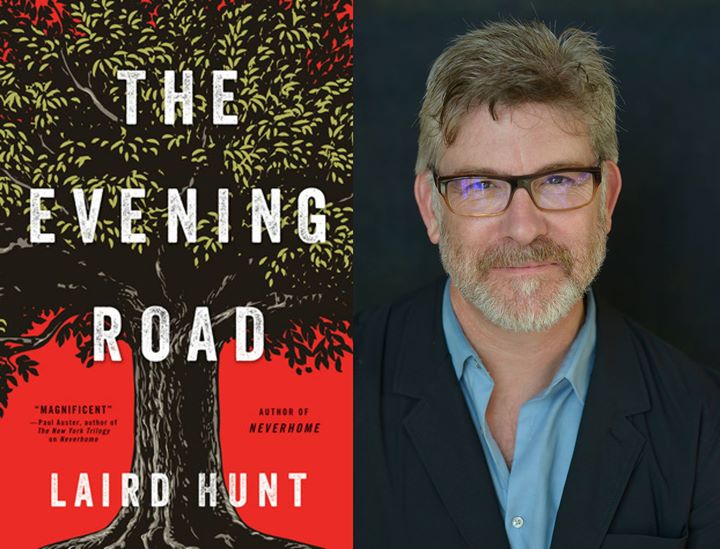 The Evening Road returns Laird Hunt to Indiana, where the Anisfield-Wolf winner lived on his grandmother’s farm during his high school years, and where his feel for the rural Midwest and its uncelebrated people has few equals in American literature.

This seventh novel springs from one of the nation’s most troubled wells. Hunt tells it over a single summer night, anchored in the bloody lynching of two men – Abram Smith and Thomas Shipp — in Marion, Indiana August 7, 1930.

“The events of that evening gave rise to the poem ‘Strange Fruit’ by Abel Meeropol, which was made famous as a song by Billie Holiday,” Hunt, now 48, writes about the source of his new novel. “At least 10,000 people (some put the number as high as 15k) flooded into the medium-sized town to attend the lynching, while the considerable African-American population of the town either stayed indoors or got out of town. While I don’t know if any of my family members attended the lynching that day/night, I found it strange and troubling that in all the years I lived with my grandmother on the farm, I never heard a whisper about what was an event of national significance and implication.”

Into that silence flowed The Evening Road, a haunting and disturbingly lyrical novel told in the voices of three women: a red-headed, big-chested secretary named Ottie Lee Henshaw trying to reach the lynching; Calla Destry, a light-skinned, intelligent and angry adolescent caught up in the mayhem, and, for the final 13 pages, the “touched” Sally Gunner, known for conversing with angels after she took a blow to her head.

Hunt is marvelous at characterization – Neverhome, his Civil War novel, rests on the mesmerizing authenticity of Ash Thompson, an Indiana farm woman who passes as a man to fight for the Union. And Kind One, his Anisfield-Wolf winner, gives readers two sisters who overthrow their 19th-century bondage on a remote Kentucky pig farm, then chain up and work the owner in return.

The Evening Road runs closer to home, chronologically, although Hunt is still liquid with his coordinates: an old crone recounts a version of Kind One almost as a spell while she is fixing Ottie Lee’s hair. Ottie Lee herself is a foul-mouthed, small town beauty with a lecherous boss and a quarrelsome husband. She falls in with three men trying to reach Marvel, as Hunt calls the town. She has wit and resourcefulness, as well as a cruelty that seems rooted in the grim past.

“The world can shut your mouth for you sometimes,” Ottie Lee reflects, having stumbled on a Quaker prayer vigil that mixed blacks and whites. “Get so big right there in front of you that it won’t fit in your eyes.” She also hears out a politician, firing up a picnic crowd he plans to lead to Marvel. He calls the lynchings “a torch of clarity to burn bright across the countryside during hard days. . . It is a difficult thing, a harsh thing, but it will burn things clear. Bring us back into balance. The hardest things always do.”

After 140 pages, Hunt leaves Ottie Lee. The second half of the book belongs to 16-year-old Calla, whose parents died in a laundry fire and who is boarding with a foster family in Marvel. She has stubbornly defied them to meet a beau, and winds up alone on the road trying to leave, but not before the crowd envelopes her: “Some were laughing like it was a true carnival, and others had on hard faces like they were marching to war. Some didn’t have on any expression at all, like they were killed folk had clawed themselves out of the cemetery just to walk into town and look glass-eyed up into the courthouse trees.”

Calla commits three brazen acts of defiance as she travels, and Hunt lets readers ponder how she and Ottie Lee run in parallel and diverge. Sudden blooms of violence pock the story, even as Hunt refrains from depicting the murders in Marvel. Instead, Calla wonders why whites “thought they needed to lift people up into the air to kill them. Their saints and sinners both. . . I hadn’t read the papers yet, hadn’t heard any accounts to turn the sky of my memories black and send me drifting forward through the dark. That would be during the days to come.”

The Evening Road may be a bucolic title, but its beckoning is urgent.  Once more, Hunt draws up sorrow and dark light from the murderous past. The politician’s mother says “place like this glues itself to your bones; you don’t scrape it off.” Rather like Hunt’s masterful new novel itself.

Editor’s note: Laird Hunt will read from “The Evening Road” Monday, February 13 at the Beachwood branch of the Cuyahoga County Library. Join us.