In 2007, when I asked my driver in Caracas if evangelical Christianity had been making its way into the oil-rich jungles of Venezuela, he nodded, smiled, and said, “Yes, they say officially they are here for the Church of Pentecost, but I think they are here for the Church of the CIA.”  In every developing nation, that nod and that smile and that second story represent the beginning of almost every great storytelling session I have had about recent history and current events.

Listen to me now.  Me warn him… Long time I drop warnings that other people close, friend and enemy, was going get him in a whole heap o’trouble.  Every one of we know at least one, don’t it?  Always have a notion but never come up with a single idea.  Always working plenty of scheme but never have a plan… Me not going name who but I warn the Singer…. Me love that man to the max.  Me would take a bullet for the Singer.  But gentlemens, me can only take one.

Writer Marlon James has won this year’s Anisfield-Wolf and Man Booker prizes by driving us past recent Jamaican history.  In a cacophony of voices, versions, and views, James writes a fictional exploration into the 1976 assassination attempt on reggae superstar Bob Marley.  In A Brief History of Seven Killings, quoted above, readers embark on a violent and entertaining ride through Kingston slum fights (sponsored by warring political parties) that become a Cold War flashpoint in Michael Manley’s Jamaica.  Marley, perceived to be supporting the socialist People’s National Party, falls victim to that fateful winter election and the CIA. The book then shifts to the United States where Jamaican political gangs morph into nonpartisan drug smugglers, tolerated by intelligence communities willing to overlook drug money if it goes towards fighting socialism and communism.  Until it gets out of hand.

The book, whose rights have been sold to HBO for a TV series, should do well as a long form television drama.  A populous that once stood at the docks to snatch up the latest installment from Charles Dickens now awaits the latest weekly HBO serial, one of contemporary America’s strongest art forms. James’ novel fits the format with its motley mix of characters and politics (“Game of Thrones”) and urban and police violence (“The Wire”).  As East becomes West, the West too has become East by picking up a taste for epic legends with endless sub-stories, ambiguous facts and no definitive, singular truth.  All thrive on a range of viewpoints, versions and classes.

From the deceased MP to the barely intelligible ramblings of a crack-fueled shooter, readers absorb from top to bottom a long overdue cultural multiplicity in A Brief History of Seven Killings. No one knows who served Mr. Darcy tea, but we all know who serves Lord Grantham tea.  All of this points to progress.  It points to the widening of the literary establishment’s mind but not perhaps as wide as it celebrates. 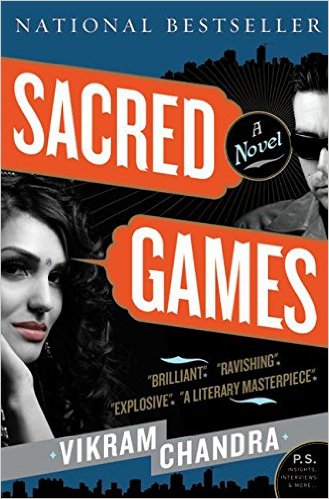 James’s novel most reminds me of Vikram Chandra’s magnum opus, Sacred Games, about a Mumbai police investigation into an Indian mafia don.  Thick with pages and characters, Sacred Games exposes the connections between the underworld, police, politicians, and the film industry.  Chandra also leaps into the future and the past with intercalary chapters that covered Naxalite rebels, Indian secret intelligence and the Partition of British India.  Few novels set in the developing world can parallel A Brief History in quite the same way.

Published to positive reviews, Chandra’s novel did not have the sales or impact other South Asian books did.  Even compared to other literary and popular books about South Asia (Bookseller of Kabul, All the Beautiful Forevers, Three Cups of Tea, Shantaram), it never received critical or popular mass appeal.  It is rare to find on bookshelves today.

Why A Brief History of Seven Killings and other South Asian novels would have similar trajectories while Sacred Games did not is clear to me.  The former have appeals to Western sensibilities that the third does not.  Three Cups of Tea (for example) has a strong element of Orientalism with the classic story of a Westerner coming to Asia and educating rural women.  A Brief History of Seven Killings tells a story about music and a musician famous throughout the West that cannot help but arouse interest in the United States.  American characters from Rolling Stone and the CIA help ease the transition into the unfamiliar worlds of Jamaican politics and Kingston slums.  If the book was about an assassination attempt on Prime Minister Manley and not Marley, we may not be having this award or book review.

Meanwhile film and music references in Sacred Games were unabashedly Bollywood; secretive government agencies were the CBI not the CIA, and the bogeyman feared is Pakistan not Russia or Cuba.  No one smuggles drugs to the United States or London.  No white people, no Christianity, no Clint Eastwood references, and no colonialism at all!

A Brief History of Seven Killings is a fantastic book, and it will make a fantastic HBO series given the novel’s natural similarity to the channel’s specialty—epic dramas.  But Sacred Games moved me more deeply as it was a book deeply rooted in its culture and unapologetically Indian.  Perhaps when we award books we should examine why some get attention and some do not and question the cultural biases we have against looking deeply into a truly “foreign” book.  A truly open mind can wade into another world mentally without needing the props of the world it just left behind.

Anand Bhat grew up in Texas and practices medicine in Cleveland.  He blogs at bhatany.wordpress.com.