N. Scott Momaday – poet, watercolorist, novelist, scholar and storyteller – is the dean of Native American writers. He is a celebrated exemplar of the oral tradition and founder of the Buffalo Trust, a foundation committed to preserving Native American culture. His writing emphasizes the radical mystery of nature, and he believes that “the highest human purpose is to reinvent and celebrate the sacred.”

Momaday’s mother, Mayne Natachee Scott, wrote children’s books, and his father, Alfred Morris Momaday, was a painter. They moved when their son was a toddler to the American Southwest and took teaching posts with the Bureau of Indian Affairs. Together, the couple composed the entire teaching staff of the Jemez Pueblo School in New Mexico for 25 years.

“From the age of 12 to 17, I lived on the back of a horse, exploring every corner of that beloved world,” Momaday says, noting with a wry smile that he and Alexander the Great were both given horses at age 12. The landscape as sustainer frames House Made of Dawn, an international classic and Momaday’s first book. It won a Pulitzer Prize in 1969 and helped Native American literature breakthrough to the mainstream.

“From birth, I grew up being in touch with sacred matters,” Momaday said. “I saw people who were deeply involved in their traditional life, in the memories of their blood. They had, as far as I could see, a certain strength and beauty that I find missing in the modern world at large. I like to celebrate that involvement in my writing.”

From childhood, Momaday moved back and forth between Indian and non-Indian settings, completing his senior year of high school at a military academy in Virginia. He took an undergraduate degree from the University of New Mexico, then won the only poetry fellowship granted his year in the creative writing program at Stanford University. He earned his doctorate in English literature there in 1963 and began his life as a scholar.

In 1969, Momaday was initiated into the Gourd Dance Society, an ancient Kiowa ceremonial fellowship, and he has attended its annual gatherings each subsequent year. Other honors accrued, including positions on the faculties of the University of California, Stanford and the University of Arizona. In 1974, Momaday became the first professor to teach American literature at the Moscow State University in Russia. In 2007, President George W. Bush awarded Momaday a National Medal of Arts.

The writer splits his time between Oklahoma City, where he served as the Centennial Poet Laureate, and Santa Fe, where he worked as a senior scholar for the Center for Advanced Research.

Momaday describes himself as a Kiowa Indian and a Western man. “I am an Indian, and I believe I’m fortunate to have the heritage I have,” he has said. “I grew up in two worlds and straddle both those worlds even now. It has made for confusion and a richness in my life. I’ve been able to deal with it reasonably well, I think, and I value it.” 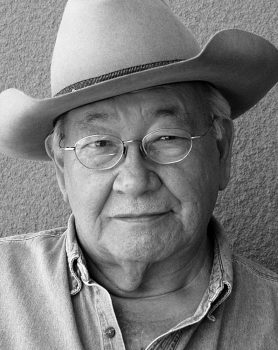